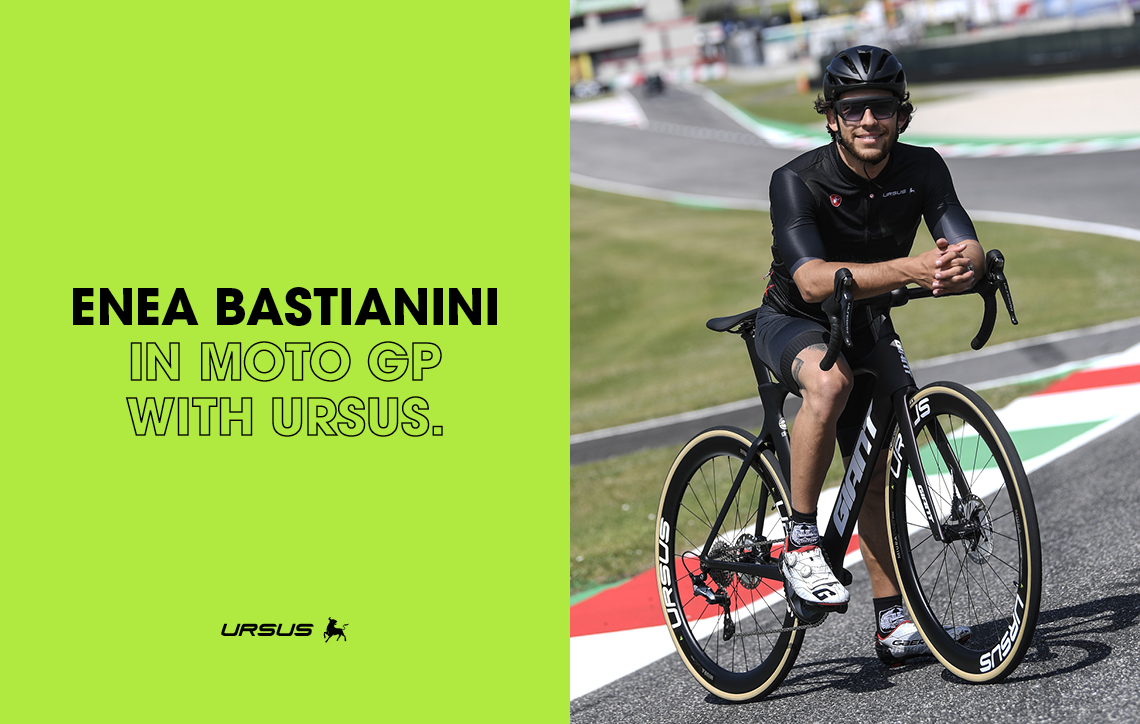 The reigning Moto2 world champion is a cycling enthusiastic. His training includes #Gladiatore wheels.
During Valentino Rossi legend’s farewell season, another Italian driver is making an enthusiastic entry into the MotoGP circuit, maintaining Ursus’s prestige and following his dream of becoming the next winning protagonist in the great tradition of Italian riders.

Enea Bastianini did not take long to prove his worth among the leaders in the Grand Prix Motorcycle Racing. His debut year has already seen him twice on the podium, an achievement attained at home in the unprecedented double event in Misano. Two engine squeals – or, better, roars – that have in fact made him the best newcomer in the drivers’ rankings.

BASTIANINI, A PASSION FOR CYCLING

But what you perhaps don’t know yet is that the “Beast” (Enea’s battle name) can go very fast even without an engine. A cycling enthusiast, the young man from Rimini supplements his functional training specific for optimum motorcycle riding with strength sessions on a racing bike. 50/60 km a week is not much for a cyclist, but for a motorcycle racer like Enea they represent the right compromise, allowing him to rediscover, on the road, the sensations of hairpin turns and braking he is so well acquainted with on the track, so he can achieve his professional goals without undermining his form.

WITH ENEA IN MOTOGP

The news is that starting this year, we, at Ursus, are by Enea’s side. Already an official sponsor of his Avintia Esponsorama MotoGP team this season, the Toro brand has recently reached an agreement to become Bastianini’s new personal technical partner. We will therefore keep on rooting for the “Beast,” hoping he will continue to make us joyfully jump off our sofas. In the meantime, for his bike rides, our new #Gladiatore can finally rely on two pairs of wheels capable of guaranteeing him unparalleled smoothness. We’re talking about Miura TC37 Disc (also excellent for gravel and for facing the Emilia Romagna’s white roads) and Miura TC47 Disc.

URSUS: CYCLING AT THE SERVICE OF SPORT

The choice of including Enea in the team of “Gladiators” ambassadors is part of a diversification policy that Ursus has been implementing in recent months. The initiative consists of making our products available to high-level athletes who practise sports different from cycling but share a great passion for bikes. The objective underlying this new sponsorship programme is to promote the benefits derived from using the bike as a recreational tool, presented above all as a solution to supplement training systems that are highly professional and quite diversified from one another.