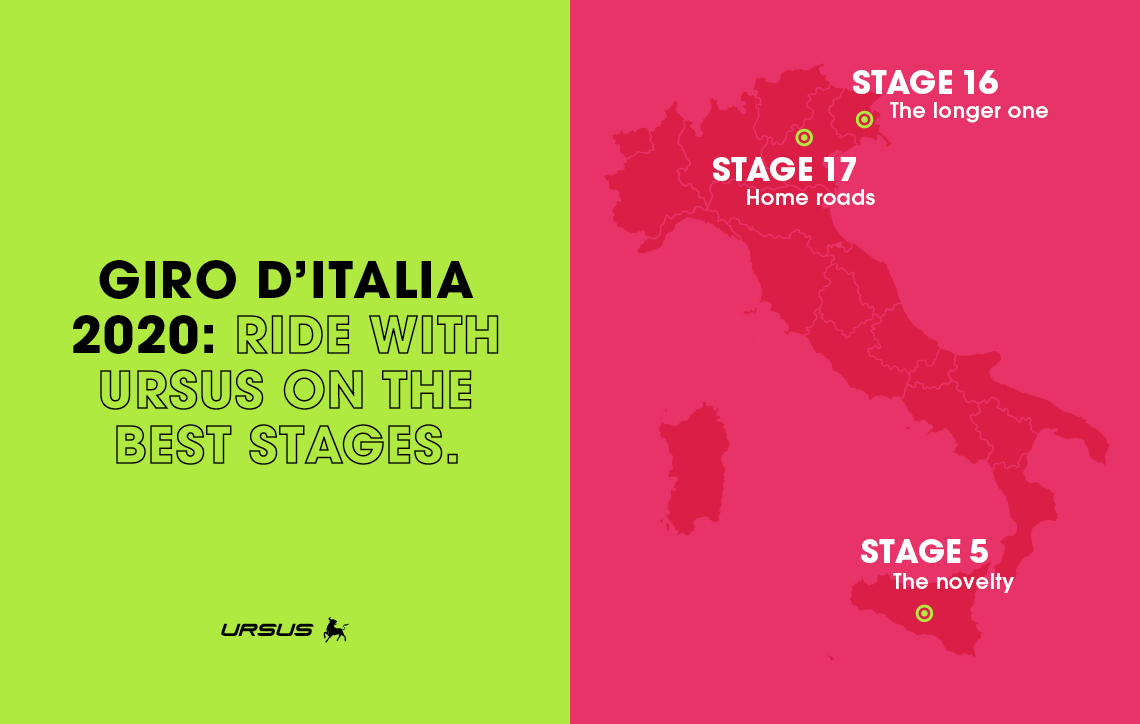 Giro d'Italia 2020: ride like a pro on Italy’s roads, with this stage guide by Ursus

The Giro d'Italia was due to start on May 12, after the three opening stages in Hungary. It would have then departed from Sicily and made its way across the entire boot, to the finish line in Milan.

As we all know, things did not go exactly as expected. So, cycling enthusiasts faced a very unusual May against their will, made even more bitter by the lack of our beloved Giro. Are we giving up then? Of course not! That's why today we offer you a selection of climbs you can recreate, taken directly from the most spectacular stages of the next Pink Race. 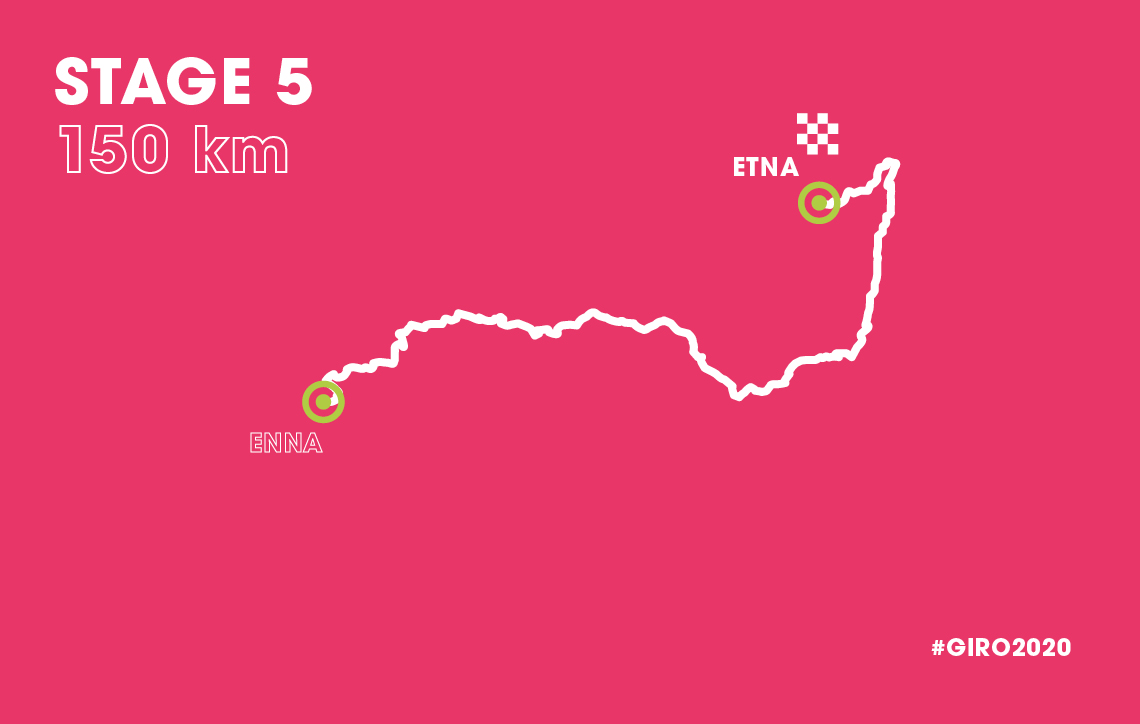 For those who love extreme challenges, the volcanic stage of this Giro d'Italia is ideal. This is an unprecedented climb, never covered in its entirety yet by the champions of the Giro. We’d have to bike through the Sicilian hinterland to the foot of the Great Volcano, and then embark on the steep climb with its finish line at a high altitude.

From the pyramid of Enna, historic ‘navel of Sicily’, we ride towards Catania, over the hills of the Dittàino valley. We leave boundless landscapes and isolated farms behind us, gliding by the medieval cities of Calascibetta, Agora, Centùrupe and extremely scenic agrarian areas such as Leonforte.

The white peaks of the Volcano are so close we can almost touch them, but we still have to ride around the Etna Regional Park, with the dry stone walls made of volcanic rock separating the countryside.

We venture on the slopes, through the villages of Nicolosi, Zafferana Etnea, Linguaglossa, marking our ride towards the crater. Around us, the landscape becomes lunar in the Mareneve panoramic, with a 1300 m increase in altitude with hairpin turns until we reach the finish line at Piano Provenzana (1816 metres above sea level).

This stage consists of 228 km between the Julian Prealps and the Tagliamento Valley. We will climb the Madonnina del Domm and the northern slope of Monte Spig, the hill of the Abbey of Castelmonte. We will reach San Daniele through Monteaperta, and then ride two laps of a very demanding circuit which culminates in Castello di Susans (15%) and the climb to Monte di Ragogna (16%).

The second of the two Friulian stages has more than 200 km of ups and downs in store for us, outlining the profiles of the Julian Prealps, then moving on to the banks of the Tagliamento river. Our first stretch will be towards Udine, the geographical centre of a land where the Alps and the Adriatic Sea embrace each other like siblings: different but intimately connected.

The curtain rises on the scenery of the city, from which we move to the north of the capital city. The pace becomes more rhythmic during the first portion of the day, the climb of Madonna del Domm, a true heritage for local enthusiasts. We continue with high gears up to Cividale del Friuli, where the end of valleys long dominated by the Lombards goes back up towards the Slovenian Alps.

The second segment of the stage begins in the eastern hills of Udine, covered in vineyards and protected by forests. Here, a series of villages bring us us to Tarcento, launching the grand finale: a ring we will ride twice, with Monte Ragogna’s slopes as high as 16%. With the sprints of a rouleur, we reach the finish line in San Daniele, and once completed the stage, we give in to a taste of the famous local Prosciutto Crudo. 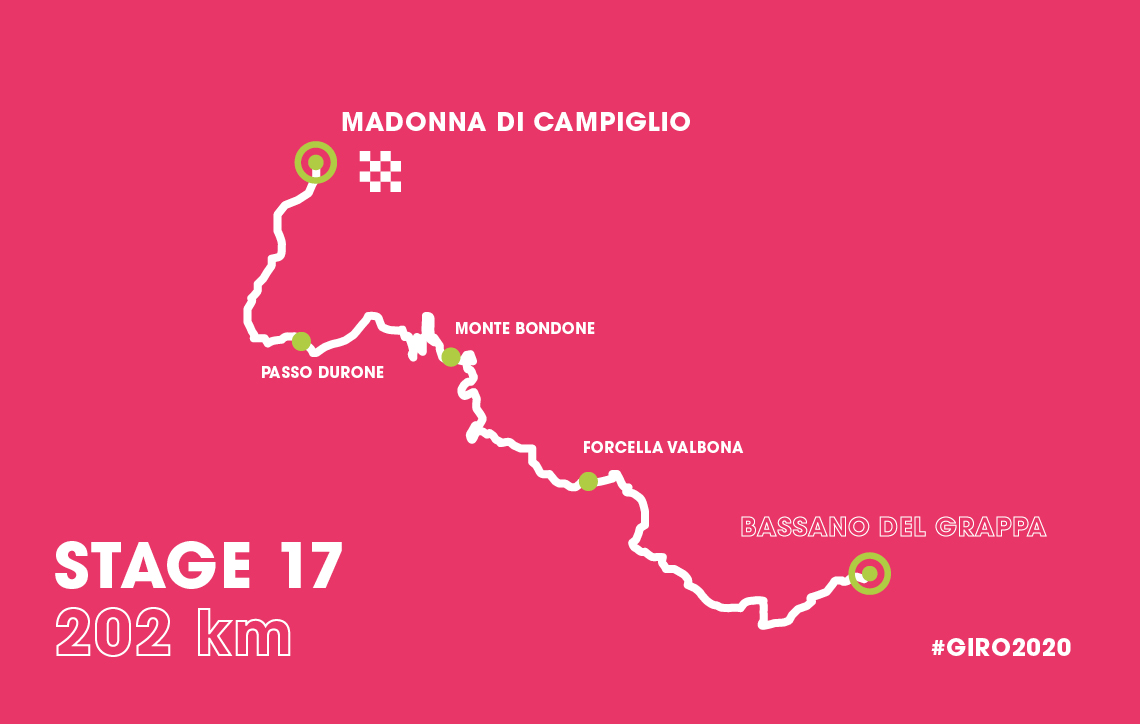 This path fully represents Venetian resourcefulness, with sharp climbs connected by continuous undulations. We will start from Bassano del Grappa, a stone's throw from the Ursus headquarters, climbing Forcella Valbona, Monte Bondone from the Aldeno side, the Durone pass and the final climb of Madonna di Campiglio.

We will prepare to face one of the most difficult stages of this Giro d'Italia, dominated by the climbs between Veneto and Trentino. In the splendid Bassano del Grappa, a city famous for the bridge by Andrea Palladio, and just 6 km from where we make our racing bike wheels, our day's work begins. We head north, crossing the Val d'Astico like a blade.

We move away from the urban centres and towards the first and highest climb, never before beaten by the Giro troop. At 1782 meters above sea level, the greenery of Forcella Valbona and of Coe Pass open up in front of us like a painting.

Launching ourselves downhill towards the Adige valley, we pass Folgaria and Castel Beseno, then climb again up to 1572 metre onto Monte Bondone through the Aldeno road. Then, we pedal through the Giudicarie valleys, passing through Comano Terme before getting our lungs ready for the last climb.

Looking down on the valley from the Durone pass, we continue towards Tione di Trento and deviate towards Val Rendena. One last, desperate, leg-breaker stretch brings us to the finish line in Madonna di Campiglio, the queen of the Dolomites.

Our journey through the most spectacular climbs in Italy ends here, but if high-altitude routes are your bread and butter, we want to give you some tips on how to face them in the best way possible. Here are a couple of insights that we think are right for you: find out why improving the performance of your racing bike matters and what the best carbon wheels for racing bikes are.